Too little, too late Too Little, too Late.
(An account our trip down the La Grand Canyon section of the Nisqually and the accident involving Chris Ringsven.)

Copyright © 2000, Oregon Kayaking. No part of this page may be reproduced, linked, or copied without the express written permission of the Oregon Kayaking webmaster.

It's 3 a.m. and I'm exhausted, but I can't sleep. I can't do anything but think about what just happened and wish to god I had been anywhere, anywhere but on the Nisqually today.

We got to the put in and we joked at the thick waivers the power company was having us sign, they were pages long and we scoffed at them, not knowing that one of us would not leave that canyon alive..

The Lagrand canyon section of the Nisqually has only run 6 times since 1912, and only recently thanks to negotiated dam releases courtesy of American Whitewater. It's a great run, but I don't remember it. I don't remember anything about paddling today.

The put-in is horrendous- a dangerous 300 foot rappel/scramble down a steep muddy slope to the river. The river itself is burly- class IV to V rapids with brown, silty glacial water that makes reading the water very difficult.

The dam viewed from the trail to the put-in. 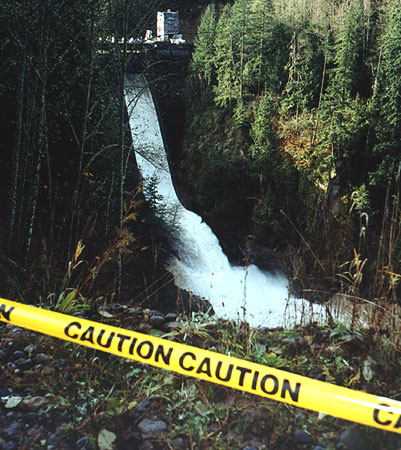 There was a group that had done the run before us who fixed a 300 foot line, and they were already on the river by the time we got down to the water because there were so many of us. There were nine in our group today: Gabe Flock, Steve Stuckmeyer, Josh Knapp, Dave Mcneil, Brad Cascagnette, and two of Brad's friends.

Coming down the last part of the 300 ft cliff.

The first group had already headed downstream by the time we got down to the river. We were all in high spirits and we waved cheerfully at the tiny figures watching from the top of the dam three hundred feet above, thankful to the powers that be that they were giving the river life again so that we could enjoy it in it's natural state.

I put in first and ran the first drop while everyone else was warming up or getting into their boats. I eddied out and then I heard the whistle. I looked downstream and I saw a paddler running up a rock ledge, screaming at the top of his lungs. I couldn't hear him at first so I paddled over and I heard him screaming faintly over the roar of the river:

Oh F - - K!! My mind screamed as my ultimate nightmare started to become reality. I turned, pulled out my whistle and blew it four times in rapid succession, which among our group means the highest level of emergency- get down here, someone is dying.

It was like lighting had struck among our group- they were in their boats in seconds and came charging downstream. We tore past the paddler, who was mutely pointing downstream, his face twisted with anguish. After several big drops we eventually we got to a large horizon line and saw some gear strewn about, but no paddlers. We jumped out and saw: Two boats, a video camera, a tether, and nothing else.

"I SEE someone!!!" Dave yelled, pointing downstream, and right then I knew we had to get him down there, because Dave is not only a paramedic, but also a certified whitewater rescue instructor. (There was probably no one better qualified to deal with this situation within a hundred miles.) With that in mind, Dave, Josh, and I tore downstream while everyone else stayed at the accident scene. Two rapids down the river was blocked by a line of boulders forming a big horizon line.

On the left side of the river I saw a blue kayak broached on a rock, cockpit facing downstream with a paddle sticking out of it. As we got closer I saw that the bottom of the kayak was ripped open and there was no paddler inside.

"I'm going!!" Dave yelled to me as Josh checked the boat, and he tore over the horizon line. I followed, totally focused on finding the paddler who had been in that boat.. We ran that rapid ok and below that was another horizon line, which we later learned was class V Triple Falls. Below it I could see several tiny figures bent over something on a rock, and my stomach turned over in horror as I saw the unmistakable up and down motion of someone administering CPR.

As Dave and I tore through Triple Falls. I don't even remember running this drop, but it was big when I looked at it later. I flipped end over end in the hole at the bottom but hardly noticed as I was so focused on getting there.... We eddied out and Dave scrambled up onto the rock to assist in the rescue breathing. I stood by to spell him if he needed it, but Dave was a machine, untiring. In the end it was all in vain: Dave pronounced the Chris dead at 12:40 pm.

By now the group had re-formed and we moved Chris from the rock in the middle of the river. His PFD had been torn off when he pinned, so I put my PFD on him and we gently roped him over across the rushing channel to the shore. "Be careful!" someone said as his face brushed a rock. At that moment the tears cut loose and poured down my cheeks, and I wasn't the only one.

We surrounded Chris protectively on the pile of rocks and were silent for several long minutes, before beginning the long exit from the canyon.

This is the drop above the pool where they got Chris out of the river, also known as Triple Falls. The bottom hole flipped me.. This photo was taken a week before the accident. Dave and I bombed over this drop, totally focused on getting to Darin and Chris. 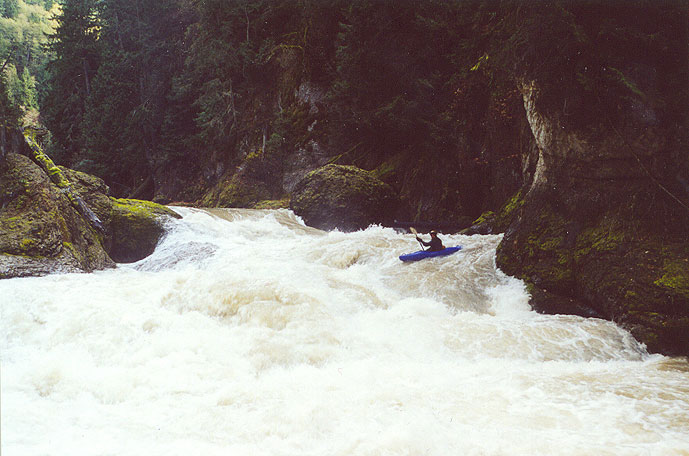 What happened next is unimportant, but it was epic. They shut the water off, which forced us to make an arduous escape up the 300 foot canyon wall. Josh and I climbed out of the canyon to fix lines, and Josh waited about halfway up while I continued to the top to get more rope.

When I reached the top I was immediately pounced on by the authorities, who wouldn't let me go for an hour while the helicopter airlifted the body out. I was really pissed at them for keeping my friends down there, but finally I hooked up with Darren Albright, one of the boaters in the first group who had climbed out of the canyon and brought the authorities. Darren and I finally escaped and evaded the authorities, ran back to the put in, grabbed the 300 ft rope, ran down a quarter mile past where the authorities had taken our spot, then climbed down into the canyon to get our friends out.

Because we were forced by the authorities to re-enter the canyon a quarter mile downstream from where the group was, we had to swim back upstream to get everyone to come down to where the rope was. Now that the dam was shut off the river was a series of eerily calm pools separated by big boulder jumbles, all between soaring vertical walls.

Finally we hooked up with our group and found that Bill Bowie, Ron Blanchette, and a few others had arrived in the mean time, part of the third wave of boaters into the canyon. While everyone got organized I continued up the canyon to the scene of the accident to get Darren's boat and see what the river feature looked like that had caused the pin with no water in it. I could clearly see the rock that had pinned chris, and it was sharp and undercut. Darren later examined Chris's boat and determined exactly what happened and that is included in his version of events on this site.

This tragic event clearly demonstrates why you need to be able to get out of your boat without using your hands. Although Chris's boat was probably crushed, a split second may have made all the difference.
I know of another paddler who died this way when he ran a drop and his bow rode up on a log that was bridging the channel. His stern pinned to the bottom of the creek and he was forced back over his back deck where he lay helpless with the force of the water coming down on his chest. In this case the paddler was still in his boat when they finally freed it hours later. Perhaps practicing this kind of escape may not have saved Chris's life, but it might save yours.

Also, the next time you put on your PFD raise your hands up over your head and have someone lift up on the shoulder straps. If it rides up more than two inches you need to tighten it. Once again, I don't know if this would have saved Chris's life, but it might save yours.

From what I understand Chris was an outstanding class V boater, so it had nothing to do with skill. Running class V is a dangerous business, and the risks associated with it can never be totally mitigated. As you can see, Chris did everything he could have possibly done to reduce risk- he paddled with a strong team, he had suitable equipment, and he scouted carefully and set up safety before running the drop. Everyone in Chris's group is a hero in my book- these guys risked their lives trying to extricate him and getting help after the fact. If he could have been saved, they would have done it.

I hope he is in a better place now.