Copyright © 2003, Chris Wheeler. No part of this page may be reproduced, linked, or copied without express written permission of the author.

This was the big one. The legendary Spirit Falls on the Little White Salmon River, Washington State, USA. The one in the videos, the magazine adverts, the one that even Pro Boaters walk in higher water and the one that has hospitalized several paddlers brave or foolhardy enough to take it on. Iĺd nailed the line off the lip of the 33ft falls but gone deep, oh so deep, into the gnarl at the base of the falls. Resurfacing downstream upside down I rolled up but it was too late, way too late, and as I paddled desperately towards the safety of river left, I slowly, inevitably, started the long slide downstream and to the right towards the nightmare walled in killer hole known asůů..CHAOS!

ĹChris- wake up weĺre lost!ĺ shouted Marcus. Oh dear, daydreaming again. I started to, focused on the road map and ordered Marcus to carry out yet another U turn. Much rolling of eyes and sighing.

Weĺd been touring Washington and Oregon for the best part of two weeks and what a two weeks. Cold, wet weather, rivers too high or too low and log jams, sure, at times, but these hassle factors were far out weighed by the discovery of a top boating destination, jam packed full of top quality, steep Grade 4-5 creek boating combined with the pleasures of US of A road culture and a great bunch of boating buddies.

But, one thing was always there at the back of our minds gnawing away, sowing seeds of doubtů.weĺd Ĺwussedĺ out of taking on the Little White. Weĺd had our reasons, largely resulting from a really rather surprising bout of good sense on our part. Right at the start of the trip, weĺd begun our build up, warming up on the West Fork of the Hood River, the Upper Wind and Farmlands section of the White Salmon and we were planning to continue through the Green Truss section of the White Salmon before taking on the Little White. The Green Truss section was running at 1,500 cfs, off the scale according to the guidebooks and whilst the Farmlands section had proved to be an excellent event free run down quality pool drop Grade 4/4+, the following Green Truss section was a tougher proposition altogether. We couldnĺt completely ignore the guidebook even if it did mean a nasty slog with boats up vertical canyon walls.

Only two days to go before the flight home, and we were back. According to the on line guides to river levels, the White Salmon was down to 1,380 cfs- still too high but hopefully more manageable- so we finally got to paddle the Green Truss section. This turned out to be an excellent Grade 4+/ 5 pool drop run. There were no rocks to be seen and many of the drops were unrecognizable from the photos in the guidebook, but the level turned out to be ideal. Levels on the Little White Salmon didnĺt feature on the web but we figured that it should have been at much the same level. We had one day to go- time to take on the Little White.

Arriving at the put in, we raced down to the river to check the level. According to the little plank of wood put in place by local boaters, masquerading as a gauge, the river was running at 3ft 6. According to the Oregon guidebook, Ĺlevels of between 2ft 6 and 3ft are ideal for a first time experienceůlevels above 3ft 3 are intense requiring paddlers to have prior knowledge of the lines through the rapidsĺ. Hmm. Conference time. What the hell, the Oregon guide was cautious, the guy at the local kayak shop said weĺd be OK and we could take it slowly and abort mission if need be. What could possibly go wrong? One member of the group sensibly opted to drive the shuttle, another whoĺd also skipped Green Truss decided to dip his toe and see how things went. So, two groups of 4 then.

On the water, the Ĺwarm upĺ lasted until the first bend in the river, all of 100 yards. The boulder gardens rapidly became more intense, the river got steeper and steeper and the break outs vanished. It was getting tough. Making micro eddies, getting out and looking downstream, all we could see were boulders, trees and white water- barely an eddy in sight, with all the water racing round the corner at speed. The group was clinging on in the remaining few eddies and group control was getting difficult. Jason opted to walk off, pretty much as planned. Some fine probing by Marcus and we reached Island Rapid, which the chap in the shop said he usually portaged. I headed off to the downstream side and reported back- it all Ĺwent down the middleĺ- no big drops. Theyĺd heard it all before and didnĺt believe me. So, I was forced to put my theory to the test, paddling off first, only to encounter a horizon line round the corner as the river dropped away. I had to trust my own eyes, so I went for it. A staircase of chunky holes ľ wow - it sure looked easier from the bank - isnĺt that always the way?

The tail end of the group ground to a halt at the horizon line - they sensibly didnĺt trust me. At this point we were, to our surprise, overtaken by local boaters. Good timing. After years of overtaking paddlers on the Upper Dartĺs Mad Mile in spate, the tables had been turned. Unlike the local boaters, none of us had run the river before, which made it a much tougher proposition, particularly at a good pushy level. The local boys turned out to be a friendly bunch (small world ľ Mark had run into one of them in Nepal and New Zealand), stopping to chat and tell us the next few lines, which in the event turned out to include some really rather unnerving Ĺmust makeĺ lines over large river wide ledge drops concealing heinous looking holes. To our relief, it dawned on us that the tough boulder gardens were over and that we had entered the pool drop latter half of the run. Yes, thatĺs right, the bit with the river wide holes and Spirit Falls.

Si Wiles surfaces below a large, blind double drop somewhere on the Little White
Shot from an adjacent cave by Mark Rainsley

We were feeling confident by now. Paddling like mad from river left to right to nail yet another must make line, I looked back only to see that Andy McMahon hadnĺt quite made the line - the slightest of errors and he was into the hole. He put up a fight but sure enough out he came. Fortunately he didnĺt hang onto his boat and paddles (as per the BCU star tests) because his kit then headed off left into a nasty sumping lava tube (not something we get in Devon), where it stayed. His kit had, as the guidebook put it, Ĺchecked into the Bowie Hotelĺ. Maybe theyĺd just had enough of Andyĺs balls to the wall probing!

Now, McMahon is made of stern stuff (heĺs Scottish and therefore probably made of girders) and insisted (against all the textbook advice) upon swimming into the cave attached to a throw line to rescue ú900 worth of kit. Scary - I was certainly feeling pretty anxious as he disappeared from view towards the undercut- but would you believe it, he managed to paddle out from the cave. A necky effort, worthy of the Darwin Awards.

Andy swims into the cave at the Bowey Hotel to retrieve his boat. Wishbone falls is about 100 feet below this spot, no eddies in between. 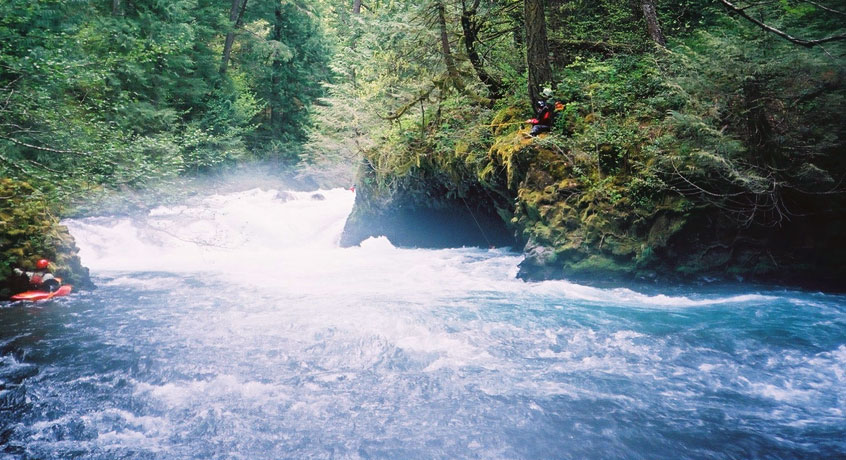 Wishbone Falls was great fun, get as far left as you can to launch from an Ĺautoboofĺ ledge, sling-shotting you into orbit and down with a crunch (oops, there goes my spine). S-Turn Falls was a classic Ĺboof or dieĺ drop. Pretty much everything ran - just. As we approached Spirit Falls, only two drops had eluded the team- the nasty looking walled in ĹBoulder Sluiceĺ and a tree at ĹStove Pipeĺ. Every corner looked like the run into Spirit Falls, every break out, the last break out from hell. We edged our way downstream from eddy to eddy uncharacteristically slowly and cautiously. In the event, the real Spirit Falls was pretty obvious- a big horizon line, tree tops ahead of us and tell-tale mist!

Like Dr Livingstone first espying Victoria Falls, we stared at Spirit Falls for the first time. As he put it, ôScenes so lovely must have been gazed upon by angels in their flightö. The falls in the videos had come to life. Fortunately, with the river running high, there was none of the usual dithering - for once we all immediately and unanimously opted for the far left route down a vertiginous slippery muddy slope, which looked pretty exciting in its own right. Firstly, though, time for the White Water Tourists to live up to their name, taking photos of each other grinning inanely in front of the falls. Playing Ĺfantasy linesĺ, we speculated about which line weĺd take and we wondered about the sanity and skill level of the guys that had run it in similarly high water. Massive boils at the base of the falls with, an undercut cliff to river right and all the water then racing downstream and to the right towards a nasty walled in slot called ĹChaosĺ from which paddlers have emerged out of their boats unconscious and in need of resuscitation.

Now, come on readers, you didn't seriously think that we were going to paddle over Spirit Falls, did you? Not in high water.

The worst was over and we knew it. More boulder gardens and two surprise river wide weirs and we emerged into utterly calm waters as the river concluded its journey by drifting into the mile wide River Columbia. ôThe Little White seems to have lost its edge, somewhatö, was Markĺs observation on the instant transition from continuous grade 5 to flat water. It had taken us over 6 hours to paddle only 3.5 miles - we were exhausted - more mentally than physically - but feeling strangely elated. We were seven British weekend warriors whoĺd just run a notorious ĹWorld Classĺ Grade 5 river for the first time in high water - and weĺd survived! A perfect climax to another very good trip. Time for beers and talk of how weĺll return one day and run Spirit Falls in lower water. Or am I dreaming again?

Chris Wheeler toured Washington and Oregon with Mark Rainsley, Simon Wiles, Andy Levick, Andy McMahon, Marcus Holburn, Kevin Francis, Neil Davey, Jason Scholey and surprise guest Phil Manfield. Mark and Simon would like to thank Perception for replacing their much loved Javas when they break them and Mark and Jason would also like thank Nookie for keeping them dry when they swim. More details of the White Water Touristsĺ adventures can be found at www.ukriversguidebook.co.uk

The Author at Spirit Falls.