Copyright © 2007, Ryan Scott and Oregon Kayaking. No part of this page may be reproduced, linked, or copied without the express written permission of Ryan Scott and Oregon Kayaking webmaster. The Tye river starts in the headwaters of the Skykomish river drainage, just below Steven's Pass. The impressive granitic geology in the area gives rise to not only this classic section, but also a number of class V+ creeks, including Martin and Deception Creek. The Top Tye is very popular with the Seattle crowd, but it's fame increased significantly after being featured prominently in the kayaking video 'Twitch 2000', when Tao and crew ran it at pretty high water.

Sometimes a new adventure requires dropping everything and hitting the road at a moment's notice! Brian Vogt had emailed me earlier in the week about a run down the Toy Tye, so I decided to join them. Brian was predicting a medium flow, which was perfect!

The Tye is a long way from Hood River, so I had to leave at five a.m. on Saturday morning. To complicate matters slightly, I had to be back in town by Sunday morning, so I would have to drive up, do the run, and head back. Most of my usual paddling partners were out of town this particular weekend, but I knew Keel Brightman would be up for a quick mission to the North Cascades.

As usual with Keel, it didn't take much to convince him. I called him up and said: "We're going to do a new run and you can go as big as you want on this one!" He was in!

We got up a little late and finally got on the road. We stopped briefly for lunch in the mountain town of Leavenworth, then rallied over Stevens Pass and dropped down to the Tye river drainage. We arrived much later than our intended meeting time but since the Seattle crew had said they were going to do two runs, we figured we had some time to scout.

We located the take out and took a quick look at Alpine Falls. After seeing that it was clear, we absorbed the fact that this run is no joke, we were in for some great creekin!

After checking out Alpine, we drove up to the put in to give Deception Falls a look.

A look at the top part of Deception Falls on Deception Creek, at the put-in for the Top Tye. About half of the falls is visible here.
This falls was made famous by the video 'Twitch 2000'.
Photo by Ryan Scott

I looked downstream from Deception Falls and saw a couple bright colors move throughout the forest downstream, so I took off down the trail and caught up to Scott Waidelich and Steve Munk. They were fired up after just running the last section of Deception Falls, and they said: "Go get dressed and we'll wait for you at Monkey Cage!"

After five hours in the car, Keel and I both were moving a little slow. Once we reached Monkey Cage Falls the rest of the crew ( Brian Vogt, Mike Novak, David Chatham, and Shaun Riedinger ) were getting ready to drop in. We didn't realize it at the time, but they had been waiting for us to show up so they were also getting a very late start.

Just before David dropped in Brian looked up and said: "This is the highest we've been on it!" David ran Monkey Cage, flipped over and then climbed right back into his IK. The rest of us got ready and went one by one as others watched and cheered on from the observation deck that extends out from the trail ( note, there are hidden rocks on the left side of this drop that have broken ankles in the past, so be sure to stay right ).

Editors Note: This drop was named 'Monkey Cage' by one of the first paddlers to explore this river because of the tourists who inevitably gather above the falls. The viewing platform extends out over the falls, and sort of resembles a cage with the high railings. Picture it: you are running the drop with a gaggle of bug-eyed tourists hootin' and hollerin' like a bunch of monkeys from the deck immediately overhead.. Hence: Monkey Cage Falls.

Monkey Cage is a great put-in rapid if you don't put in further upstream ( there are more big drops if you use the upper put-in, see end of report for details ).

We got out on the right to check out Crack in the Earth. It seemed to be in a weird medium-flow range. The far right slot had barely enough water going through it, not enough for a smooth line, and the boxed-in ledge to the left was pretty full and looked like a very tough ninety-degree mid-air turn, with the bottom hole in full effect.

After studying the hole for awhile we all portaged Crack on river right.

Christian Knight fires up Crack in the Earth, which is just downstream from Monkey Cage Falls.
Photo used by permission of the photographer, Jock Bradley

Just downstream of Crack is a steep ledge with a very powerful hole that is infamous for punishing unwary boaters. Keel and David decided to run this ledge while the rest of us did the quick ferry and portage on the left.

Keel Brightman runs the drop below Crack in the Earth.
This hole is infamous for trashing unwary paddlers.
Photo by Scott Waidelich

David wiped out in the ledge below Crack and luckily flushed out immediately, but his IK spent some quality time in the hole before Mike and Keel were able to pull it out.

Just downstream we ran a couple of fun class three rapids then we took out on river right above where the river pinched down to about ten feet and dropped over a huge horizon line. We scrambled downstream on the right and looked down into Log Choke Falls, which has cleaned up a little this year. Of course, clean is relative when it comes to this drop; there are still a couple of logs in it.

Looking down into the latest version of Log Choke Falls.
Local paddler Tao Berman was the first person to run this drop, and it was the older, nastier version..
Photo by Ryan Scott

Tao Berman's landmark descent of the old 'nasty version' of Log Choke Falls, in 2000.
( This was his second trip over the falls, and he is still the only person who has ever run it as far as I know. )
Photo used by permission of the photographer, Jock Bradley

Scott was very fired up to run Log Choke and it really looked better than I had imagined it would, but there was still too much wood in the drop for us so we portaged on the right.

Directly downstream of Log Choke ( with no slack water between the two ) is Box Drop. We hiked around Log Choke and dropped into a small eddy against the river right side just above Box. The move here is to ferry out to the center just above a narrow sieve slot, catch the current, and go for the auto-boof right off the center.

Keel Brightman peels out below Box Drop.
The newer, friendlier version of Log Choke Falls is visible in the background.
Photo by Ryan Scott

Below here was another semi-sticky ledge that everyone ran on the left side.

After a few shallow boulder gardens we came around the corner to a pinch in the canyon. Below here is Paranoia, so we took out upstream on river left.

Steve tried to scratch his way to the lip of the entry drop on river right, and he started falling out of the eddy and was forced to dive out of his IK grabbing the last possible rock. Luckily he was able to grab his IK in the other hand he pulled himself up to the right side portage ledge. Based on this near-miss, I would recommend scouting from river left..

The flow was obviously on the rise while we were there and Paranoia was looking pretty ugly with the ledge just around the corner as the combo. No one was willing to give today.

Looking down into the boxed-out horizon line that forms Paranoia.
Photo by Ryan Scott

Fatigue was setting in though out the group so a few of the group decided to call it a day, that's the nice thing about his run, It's roadside and many places to get out if need be.

The rest went down stream through Triple Drop and the final boulder garden that pinches down into granite walls at the bottom before taking out at the Highway Two Bridge. Just downstream of the bridge is class six Alpine Falls. Don't pass the bridge if you don't plan on running Alpine, because it's right around the corner!

We walked downstream and drooled over Alpine Falls for about a half hour. All of us really wanted to run it, but if you miss your line you will most likely die. I think Tao was among the first to run this one, and it has been run a few times since.

Alpine Falls has a few reaction waves pushing from left to right in the lead in as it drops over an eight-foot sloping ledge into a hole. The trick is to stay left all the way until you are on top of this ledge. Once there you are lined up for the bottom slide, which is about forty feet tall. The right-to-center side of the top ledge has a huge upstream hole the pushes and feeds out the undercut right wall.

Keel Brightman contemplates the do-or-die move at the top of Alpine Falls.
You have to get far left after you run the first drop, or its all over..
Photo by Ryan Scott

Alpine Falls, from the front. The river-left side is where Tao has run in the past.
The river-right side is where you don't want to be and would likely be fatal if you ended up over there.
Photo by Ryan Scott

The flow on this trip was 6,200 cfs on the Skykomish at the end of the trip, it came up while we were on it.

Put in: We put in a Deception Falls Park and ran down to Monkey Cage. You can also go up a little further above the Spout and Skin-so-Soft, check the Bennett Guide book directions.

Take out: Drive east on Highway two from the town of Skykomish. Once you see the second bridge over the Tye River there's a pull out on the right side just before the bridge. If you coming down from Steven's Pass you'll cross Deception Creek then about 1.5 miles later you'll cross the take out bridge for the Top Tye. Alpine Falls is just downstream of this bridge.

The Top Tye, the red dotted line shows the section we ran. The upstream put in is visible here as well.

For more detailed directions to the put-in and take-out, as well as other info, pick up the second edition of the bible, Jeff Bennetts 'A guide to the Whitewater Rivers of Washington', a book no serious Northwest paddler should be without. You can pick this book up at your local paddling shop, or on amazon.com. 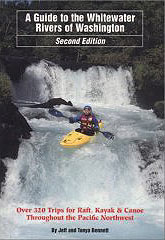