The Niagara section of the North Santiam
By Jason Rackley

Copyright © 2007, Oregon Kayaking. No part of this page may be reproduced, linked, or copied without the express written permission of the Oregon Kayaking webmaster.

The North Santiam river runs year-round, providing a playground for western Oregon paddlers during even the dryest summer months. The dam-controlled nature of the North Santiam ensures that the river never drops below nine hundred cfs, and with four runnable sections below the dam, there is always something to paddle.

The uppermost of the dam-controlled runs on the North Santiam is known as 'Niagara'. This run starts at Big Cliff dam and ends five miles downstream at Packsaddle park.

Each year in September the base-level 900 cfs flow in the North Santiam starts to gradually creep up as the damkeepers prepare for the onslaught of winter rains. Kayakers from all over the Willamette Valley watch the flows, and when they hit fifteen hundred cfs you start seeing a lot of activity on this river. Eventually they raise the flows to the 'sweet spot' of twenty-five hundred cfs on the Mehama gauge in October, which is an optimal medium flow for the North Santiam.

A group of kayakers gather at the put in for the the Niagara section below Big Cliff dam.

In addition to being the most difficult of the four year-round runs on the North Santiam, Niagara is also the most scenic. Paddlers who run this section are rewarded with dramatic rock formations, nice forest scenery, and a scattering of very fun rapids. The play is average with no stand-out features, but there are some nice spots if you keep an eye out.

There are two large rapids on the Niagara section, and they vary greatly in difficulty depending on the flow. In general, when one is difficult the other is not, and the combined rating of the two rapids usually adds up to eight ( i.e. when one is class five, the other is class three, and vice-versa, except when the flows reach 4,000 cfs on the Niagara gauge, when everything is big.. )

The first of these two large rapids is The Narrows. At lower flows the Narrows are formidable, with a huge hole at the top followed by a riotous mix of hydraulics, funky water, and undercut walls. There is a class three rapid leading directly into the Narrows with a short pool in between, so be sure no one swims out of this rapid and into the Narrows ( which has happened in the past ).

Jesse Coombs and Brad Coleman ponder the power of the Niagara Narrows at 1,500 cfs during a recent October run.

Paddlers generally run far left at the top of the Narrows to avoid the giant hole at the top of the rapid. This the safest line because all of the unfriendly features in this rapid are located along the right side. However, anyone choosing to run this rapid should walk down the river-right side and carefully examine the left wall immediately below the rapid.

Here the water boils and churns into a nearly invisible 'Green Room' in the left wall. This wall and the hidden 'room' is known as 'The Shipwreck Wall' after a local paddler became trapped and dislocated her shoulder here. I know of two other people who have ended up in this 'room' as well, so do everything you can to stay off the left wall below the Narrows. If anyone ends up in the room, be prepared for a lengthy boat recover effort.

Local pro Jesse Coombs fires up the rarely-run right side of the Niagara Narrows at 1,500 cfs.
( Most paddlers sneak far left past the huge hole guarding the entrance of the Narrows at this flow.. )
photos by Jason Rackley ( from above ) and Conor Kelly ( from below )

A raft crew enters the Niagara Narrows at 2,500 cfs on the Niagara gauge.
Photo by Pete Giordano, courtesy of Blue Sky Rafting Company

Downstream of the Narrows the river mellows somewhat with some smaller rapids and great scenery. Eventually you reach Niagara, which is the other significant rapid on this run. Niagara was named in the late 1800's when a primitive rock dam was constructed at this narrow pinch in the river to make paper from straw. The project was abandoned in 1912, but parts of the structure remain to this day along with the name. At Niagara ( which is also a park and tourist attraction ) the river squeezes down between dramatic rock walls with several twists and turns before emptying into a large, swirling pool.

The entrance to Niagara is can be tricky depending on the flows. There is an excellent boulder garden leading to a left turn in the river. Once you round the corner the river narrows dramatically and surges through a slot that varies in width from 4.5 feet ( low water ) to eight feet ( higher flows ). Once below this slot, the walls close in and the hardest part of the rapid waits just downstream.

Jesse Coombs runs the lead-in to Niagara at 1,500 cfs.
At this flow the entrance slot is about six feet wide, requiring precise boat control.

Once past the entrance slot, paddlers enter short, zig-zagging gorge with overhanging walls and deep, powerful currents. At base low summer flows Niagara is a mellow ride through the heart of a spectacular rock formation. At flows over 2,500 this rapid starts to get very pushy with huge boils and whirlpools. At flows over 4,000 cfs on the Niagara gauge, this rapid is class five with massive hydraulics feeding into bottomless undercut walls. Scout before committing at high water.

Megi Morishita enters the zig-zag crux of Niagara at 2,700 cfs on the Niagara gauge.
Photo by Pete Giordano

Below Niagara are a few catch-on-the-fly waves and holes leading up to the flat water above Packsaddle dam. This dam has been run but the hole is huge and lethal and should always be portaged. One raft spent over a week surfing in the hole at the base of the dam and was finally shot full of holes so it would sink and flush downstream. Take out on the right side and portage on the elevated walkway ( there is a chain and a sign that says 'authorized personnel only', but this is mainly to keep gapers from going down and messing with the Salmon ).

In the fall, the Salmon are spawning and you can watch them working their way up the fish ladder after their long journey back from the ocean..

Jesse checks out the spawning salmon during the dam portage.

Putting in below Packsaddle Dam.

Below the dam it is a short flatwater stretch to the take out at Packsaddle Park, which is the put-in for the Packsaddle run.

The beauty of the North Santiam drainage is one of the highlights of any trip to the area.
The take out for Niagara looking upstream. This is the put-in for the very popular year-round class II (III) Packsaddle run.

It is often a good idea to continue a couple of miles downstream from Packsaddle Park and take out at Spencers hole, one of the best playspots in the state. At low summer flows you can attain up the river-left side and get big air in the hole, but at higher water the sweet spot moves around somewhat.

The photos below were taken in early November at 2,700 cfs on the Niagara gauge. There is a very nice super-fast surf wave at the entrance to Spencers at this flow suitable for small, fast playboats. If you get blown off you have to hike back up, but the rides are long enough and fun enough to make it worthwhile!

The author surfing it up on the entrance wave at Spencers at 2,700 cfs on the Niagara gauge.
Photo by Pete Giordano

Below Niagara section two of the year-round North Santiam runs from Packsaddle Park to Mill City. This six mile class two-three play run features Spencers hole, one of the best playspots in the state at low summer flows. Below Mill City is section three, a mellow eight mile class two float which has served as a training ground for legions of local kayakers in their first year of boating, myself included.

The fourth and final section ( Mehama to Stayton ) is six miles of mind-numbing flatwater with the exception of the Dead Cow Wave, located exactly halfway through the run. Dead Cow is pretty good, but you gotta want it. In the winter the rains bring in a fifth section, the class III-IV Bruno Mountain section that flows into the Reservoir far upstream of Niagara.

For flows and directions, pick up the latest copy of 'Soggy Sneakers', the paddling guide for Oregon and Southern Washington. This river never drops below 900 cfs, and there is an internet gauge ( North Santiam at Niagara ). 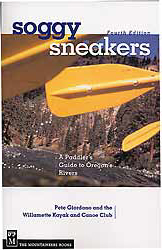