Copyright © 2009, Oregon Kayaking. No part of this page may be reproduced, linked, or copied without the express written permission of the Oregon Kayaking webmaster.

Despite its close proximity to Portland, the North Fork Washougal spent years in relative obscurity because it wasn't possible determine flows in the Washougal drainage. All of that changed when a gauge was installed a few years ago, and this run has steadily gained popularity ever since. In my opinion, the North Fork of the Washougal is the best class four 'back yard' run for Portland paddlers when the flows are right.

This run has also gained popularity somewhat in recent years due to the discovery of Hagen Creek, which enters the North Fork just above Teakettle Falls. Paddlers running Hagen often take out at the first road bridge, which is unfortunate because if the river is running at a healthy medium-high flow the lower section is really great! If you run Hagen and the North Fork is cranking, do yourself a favor and keep going on down to the fish hatchery. You won't regret it.

Pete Giordano and I saw that the North Fork was at eight feet one Saturday and we rallied up to run it. When I got in the car to do the shuttle, Pete was still working his way through the breakfast of champions: Reeses Peanut Butter Cups!

Mmmmm Reeses: The breakfast of Champions!

If the river is running at eight feet you have two choices for a put ins: Hagen Creek or on the North Fork itself, which you cross on the way to the Hagen put in. If the road is clear of snow, Hagen is the preferred put in. On this particular day the road was blocked with snow, so Pete and I opted to put in on the North Fork itself, which is the 'old school' put in from the guidebook.

Below the old school put in for the North Fork the river is fun and creeky, with gin-clear water and fun little rapids that do absolutely nothing to prepare you mentally for Teakettle Falls, which lurks just downstream at the confluence of Hagen Creek.

The river starts to open up a bit as you approach the confluence of Hagen Creek and Teakettle Falls.

You'll know when you get to Teakettle Falls, because Hagen comes in on the right and the river drops out of sight around a left corner over a big horizon line. Scout this two-tiered drop on the right, and paying special attention to the bottom falls. Three lines exist here. At flows of eight feet or higher the hole has mauled some good boaters, so scout carefully.

1. Generally, paddlers run the first falls far right, then drive far left on the bottom falls and boof into the eddy on the left. This is known as the 'Safe Line', and it looks easy if you do it right.

2. The middle 'Hero Line', also known as the 'I Tried For The Safe Line But Didn't Make It Line' is to go down the middle tongue, threading between the two beefy holes. Hit the fold just right and you'll blast right through.. Otherwise, prepare to get stomped. Sometimes paddlers take the Hero Line on purpose, as demonstrated by Jesse Coombs in the photos below and Mike Long in the Hagen Gorge video.

If Teakettle isn't to your liking, portage on the right along a well-worn trail which leads to a rocky grotto where you can scramble down to the river.

Below Teakettle the river maintains a quick pace with some smaller rapids leading up to a flume drop. Here the river drops down into a narrow, churning slot that pushes into the left wall at the bottom. Hit it hard and stay straight, or sneak right and boof over the slot if you aren't feeling it that day..

Pete drops into the flume drop. Stay off the left wall below this one!

Below the flume drop the river keeps rolling along with a series of fun rapids, eventually narrowing down to a fast wave train leading up to the second class V falls. Make sure you are paying attention, because this falls can sneak up on you. Catch the eddy on the left and get out to scout.

This double falls was often portaged back in the day, but with the creeking crowd running Hagen it gets run all the time these days. The first drop is easy, just plop over the boof flake and try to stay off the left wall. The bottom drop is where all the action is. Here the river narrows down into an ultra-violent slot with all kinds of interesting things happening in there. Generally, the best line is to get a deep water boof with a touch of right angle at the bottom. If you do it right you won't get your head wet. Either way you'll come through, but you'll be under water the whole way if you don't make the move.

A note on portaging the double falls: Don't go up into the woods. I've seen other groups doing this and it takes way too long. The best portage is to walk down the bedrock on the left side until you reach a shelf that is just above the outflow from the second drop. Seal launch off of the small shelf, this will save you time and energy.

Brad Coleman drops into the ultra-violent slot just downstream of the first big drop of the double falls. 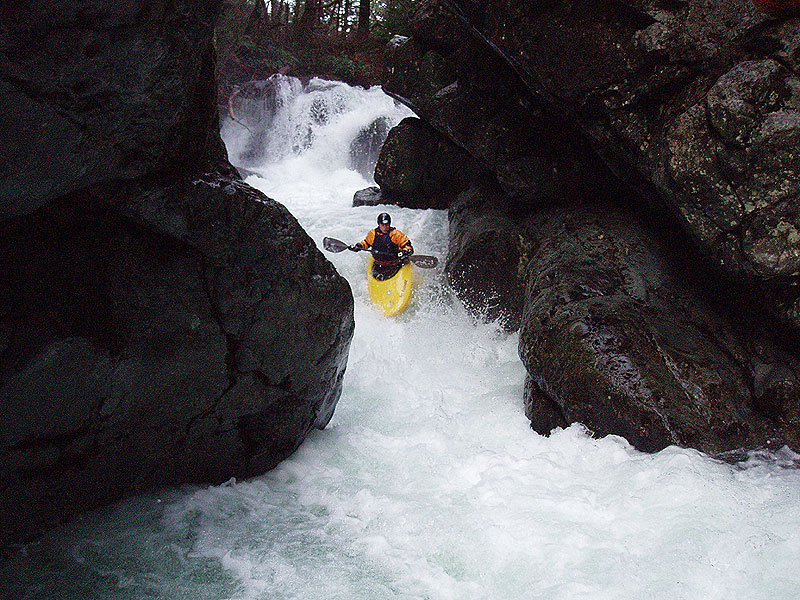 Below the double falls are more interesting, ledgy rapids. Soon you reach a distinctive rapid where the river narrows and forms a series of waves and wave holes and picks up speed as it moves down through the constriction. The rapid isn't super hard, so keep your attention focused downstream because there is a large horizon line waiting below.

This is the horizon line marks the final falls on the North Fork, Bowey Falls. Bowey Falls is, in a word, nasty. This drop has been run ( first known descent by the late, great, Bill Bowey ) but it is not recommended. Here the river drops into a claustrophobic crack and the outflow goes sideways, not downstream, under the walls. The cavernous undercuts here are some of the worst I've seen and will deter pretty much anyone who studies the landing carefully.

Eric scouts out the only recommended portage on the North Fork, Bowey Falls.
This one has been run, but is not recommended. The portage is easy.

Just downstream of the portage is Triple Drop, a series of slides with some holes that get sticky at some flows. At flows over nine feet eddy out on the right well upstream and climb down on river-right to scout. There are a variety of lines here. Far, far left is easiest. Anywhere in the middle is something else entirely.

Eric punches the second hole in Triple Drop.
The bottom hole here is big and sticky, but easy to avoid if you stay more left.

Eric, stuck in the the hole at the bottom of Triple Drop.
He was in the hole for about twenty seconds and flipped once, but he kept his cool and surfed his way out the weak side on the left.

Below Triple Drop are more smaller rapids leading up to the first of three micro-gorge sections. The first one is the most difficult, with a large wave hole guarding the entrance and a very large hole on the outside right inside the gorge, where all the water is going. You have to be on the left side when you enter the gorge, or you go in the hole. Not a super-difficult move but it can be exciting. The move here is a much easier version of the line on Upper Zig-Zag on the Green Truss section of the White Salmon.

Looking down into the first micro-gorge, which is kind of an easier version of Upper Zig-Zag on the Green Truss.
This is the first of three short gorges on the North Fork.
The large wave hole guarding the entrance to the gorge is visible here.

One of the last, distinctive rapids on the North Fork is marked by a Day-Glo green wall on the left hand side of the river. This wall is visible from far upstream, so when you see it catch an eddy on the left and scout the ledge just around the corner. The ledge has several slots surrounding a middle boof, or at healthier flows you can slide down the main face. The most-recommended line is the middle boof in between the right and left slot; least-recommended line is the chunky slot against the right wall, it has beatdown written all over it. The left-side slot is bad news too, I ran it one time and it was unpleasant.

Eric runs the final ledge while Pete watches from the eddy below.
This slide-line is only possible at higher flows. At most flows the middle boof between the two slots is recommended.

The cool Day-Glo green wall that marks the final ledge. This wall is visible far upstream of the drop.

Below the slot drop the river keeps going through more fun rapids, with some really good surf waves above the hatchery. There is also a five foot tall lowhead dam to negotiate when you reach the hatchery, so keep an eye out for it. The hole where is sticky, but on the far right side is a nice slide which avoids the hole.

Looking downstream during the shuttle

Flows while the photos on this trip report were taken.

Flows while the photos on this trip report were taken.

Washougal cfs gauge. Between 4000 - 5000 cfs is the optimal flow, either rising or falling.

Washougal foot gauge. Between eight and nine feet is the optimal flow, either rising or falling.

The old standby gauge, EF Lewis. We used to use this before the Washougal gauge came online.
Not sure how well this correlates, but you want between 2000-3000 cfs.

For directions to the put-in and take-out, as well as other info, pick up the second edition of the bible, Jeff Bennetts 'A guide to the Whitewater Rivers of Washington', a book no serious Northwest paddler should be without. You can pick this book up at your local paddling shop, or on amazon.com.